The SSL Bus Compressor: A Classic For a Reason

For those of us who are privileged enough to have worked on an SSL desk, the news about SSL releasing the SSL Native Bus Compressor is music to our well-trained ears.

The SSL Native Bus Compressor is a plug-in version of one of the most important mixing tools ever created: the classic SSL Stereo Bus Compressor from the 1980’s G Series analog console.

A lot has changed in the music industry in the past 20 years or so.  For the most part, there is a generation of artists and engineers that have grown up working “in-the-box.”  Many have not had the luxury of working through their mixes on an analog SSL console, and therefore don’t fully grasp the importance of SSL’s place in recording history. The SSL Stereo Bus Compressor is a “sound” you’ve heard on countless hit records over the past 30 years.

When applied effectively, it has the unique ability to glue a mix together, making it sound bigger and punchier.

This unique sound and character makes it the icon it is today.

You don’t have to take our word for it.

Look at these stats…

But before jumping into some of the technical aspects of the plug-in, let’s take a short walk back in time, and get a better understanding of the historical significance and origin of the original SSL G series mix bus compressor.

The circuitry that controls the way the compressor acts resembles another compression classic, the UREI LA4A. This was first incorporated in the now-rare SSL B series console, for use in its channel strip compressors.

If you want an idea of the sound, this legendary design is a big part of the iconic, paradigm-shifting drum sound on Phil Collins’ “In the Air Tonight”. Who hasn’t air-drummed that classic fill at least once in their life?

Eventually, the demand for this compressor enabled SSL to offer rackable versions, so engineers can get that legendary sonic footprint, even without an SSL desk at their disposal.

The original SSL G Bus Compressor uses a voltage control amplifier (VCA) to compress the signal, as well as a VCA-enabled detection circuit to adjust how the compressor is applied.

This is called a feedback design.

Since electrons flow so quickly, there is no perceived delay. The result is the sound of a smooth and musical sounding compressor.

The user controls for attack and release settings are inline after the detection circuit, providing the user with incredible control.

Now let’s take a look at the plug-in…

The VU meter shows you the amount of gain reduction provided by the compressor.

Don’t be fooled by the simplicity of the interface. Behind only a few basic controls lies a sound that has graced a huge percentage of the most impactful and successful records of all time.

There are two rows of knobs. The top row provides Attack, Release, and Ratio.

NEW IN V6.2: SSL added an adjustable high-pass filter in sidechain as well as a ‘dry/wet’ mix control for parallel processing. 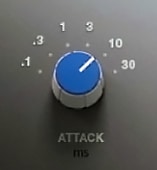 The Attack knob controls the speed at which the compressor comes to full effect once the threshold level is crossed.

The faster the attack time the more the attack of the wave form will be affected.

Slower attack times allow more punch to come through before compressing the signal. The Ratio knob might initially seem tricky, but its usefulness quickly becomes apparent.  A ratio of 4:1 allows for 1db of gain for every 4db over the threshold.  Following that logic, and thinking reversely, every 8db over the threshold would result in 2db of output.

In order to fully grasp how this compressor works, we need to discuss the concept of internal settings, which regulate how quickly compression actually takes to occur.

We call this the “knee”.

On a graph, this would look like an actual knee, hence the fairly obvious term.  “Hard knee” compression is immediate upon crossing the threshold. By contrast, “Soft knee” is a more gradual ramp up.

Internal settings adjust the SSL Native Bus Compressor, so it ends up having a softer knee the harder you hit it.

Even a ratio of 10:1 doesn’t end up completely squashing your mix.

Mixes retain their dynamics, as opposed to something that sound “flattened” and on the verge of “brick wall limiting.” Finally, the bottom row of knobs allows to adjust Threshold and Make-Up.

Threshold is the level of gain required for compression to begin. Make-up (no, you aren’t about to step into a trailer on a film set) allows you to manually increase the output gain of the compressor, should the need arise.

When first applying the SSL Native Bus compressor, start out by selecting a Ratio, and then set the Threshold.

Now don’t get too excited if it sounds loud and in your face.

This might be fun at first, but you always want to be sure to retain the dynamics.

A recording needs to “breathe”, for lack of a better term and nothing makes the brain shut off faster than listening to something static and sonically unvarying.

So, try different Ratio settings, and listen to how the feel of your mix changes.

Once you have the Ratio and Threshold “dialed in”, you can start to fine-tune your other settings.

Attack and Release can make or break the whole impression you’re trying to create.

Your mix should be pumping rhythmically, in a way that makes people move.

The Attack should be set so that your transients still “pop”.

PRO TIP: If your mix starts to sound dull, slow your Attack rate.

With the Release, you want to slow things up so as to have a nice, smooth release, and not cause any “pumping” by the compressor (this “pumping” is NOT the musical kind I referred to previously).

PRO TIP: If your mix sounds like it’s dragging, your first step should be to speed up the Release time.

Once all of your settings feel just right, you still have the Make-Up known at your disposal, for any extra gain.

You can certainly push the output of the compressor if needed, but remember not to fall into the trap of being seduced by how loud things are sounding.

Mastering engineers vary in their opinions, but it’s a good idea to leave around 4-6db of headroom.  This makes them happy and gives them room to work.

The SSL Bus Compressor: A Classic For a Reason

The SSL Bus Compressor is a simple unit with a simple purpose; it makes complete mixes sound bigger, with more power, punch and drive.

If you need cohesion and strength to your mix without compromising clarity, this is the right tool for the job.

Explore as many creative options as possible, so you gain a firm understanding of what’s possible.

Recording equipment, like musical instruments themselves, are meant to be “played.” Don’t be afraid to disregard traditional ideas and approaches, and really push the creative envelope.

While certain aspects of recording may seem quite scientific, always remember, in the end, the goal is to assist in the creation of art. Get The Authentic SSL Sound In Your DAW

Get FIFTEEN SSL Native plug-ins on a monthly-rolling or annual subscription fee. Get the authentic SSL sound for your DAW!
15 Essential Mix Tools Designed By SSL Engineers
Only $14.99/month
Get the SSL Complete Bundle